Keeping Motivation High at the Studio

Oulu Game Day was a success. Not that it had any right to be given the amount of time we had to allocate to testing. We got lucky. There were a couple a game-breaking bugs, but fortunately they didn’t occur too often. The game did freeze a couple of times, which is worrisome, since a bug like that can be a nightmare to track down in GameMaker: Studio. 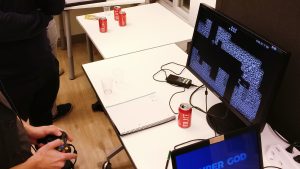 It was great to see how people played the game. Many issues regarding the game balance surfaced during the event. Some of them were due to the lack of preparation time. Some were genuine problems we now have to evaluate and react to in one way or the other.

The game is coming along and having a deadline really made a difference. Sure, you can make imaginary deadlines to your scrum boards and really try your hardest to not fail. However, when you have to go present your game to other human beings, the idea of failing starts to become more terrifying (or if you have pride in your work, just plain unacceptable). Realizing this, we started to look into another events that would give us an actual deadline to work towards. And we did find one.

Riptale being our first game is the chance for us to show what we’ve got. When we have really established ourselves, we can probably ease with the deadlines a little bit, but now is the time to work hard and put the name of our studio to the map. In the simplest of terms, a successful game will allow us to make another one.