Next Friday we’re attending a local event called Oulu Game Day. Granted, Oulu isn’t a big city, but a change to get any feedback on our game is one that we don’t want to miss. You can always have people on the Internet tell you what’s good and what’s bad, but if you want to get a some nonverbal feedback, you have to see people as they are playing your game. The only question is whether or not we can get the demo in a good enough shape to be able to receive any useful feedback. I.e. you don’t need people telling you things you already know. The really valuable part is observing what things need to be balanced out more.

So, what is still so broken that it can’t be fixed for Friday? Our whiteboard says it all. 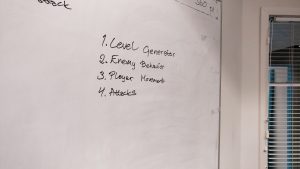 The one big hurdle so far has been the level generation. Due to the unholy union of Tiled and GameMaker: Studio, we’ve had to simplify our designs time and again to be able to get content out fast enough. Here’s the nitty gritty:

GameMaker doesn’t natively support Tiled TMX format, but it does support binary files. Hence, Mr. Mikael “Mick” Norrgård at GamePhase wrote a TMX to binary converter to make it possible for these two pieces of software to be used in harmony. Much obliged. The problem is that the converter doesn’t save all of the level data into the output file. It does plenty, but even so, we’ve had to come up with some interesting solutions to get GameMaker to generate the kind of dungeons we want for our game. Is it a huge problem? Not really, if we weren’t in a hurry. 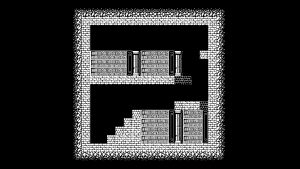 There’s no doubt that we’ll be able to get all the functionality in the game by Friday. The scary part is that we won’t have time to test it properly. The best thing we can do in preparation is to dust off our humble hats and get ready to apologize a lot. Then again, it might go swellingly.

2 thoughts on “Preparation For Unforeseen Disasters”