Consider talking. It is a very powerful tool, yet incredibly difficult to utilize. Getting people to talk about your game even in passing seems nigh on impossible, even when those people are your fanbase. They may even want to help you out in some way but might not realize that simply telling other human beings about the game can be quite useful. We’re not marketing experts. However, we understand that there needs to be an audience that’s at least aware of your product in order for it to be successful.

We’ve tried to tackle the marketing problem the best we can. The website is finally ready and now offers the visitor basic information about our company and the product. It hardly empowers them to take any action to get the game released, though. This is why we’ve been exploring some social media outlets to help them do just that.

As a small company it is important to focus your resources to those social media sites that matter. Some of them seem like they have potential, but require a lot of effort to utilize properly. One of these sites is Google+. We update our profile there regularly, but the simple act of connecting with other people seems fairly inconvenient and convoluted to first-timers like us.

Other than that, we’ve been working on the level generation and enemy behavior for Riptale. Interesting generated content can be a challenge to perfect but it is also a very interesting concept. There are multiple ways of building the creation algorithm for procedural levels and the experimentation continues as to what works out best for our game. 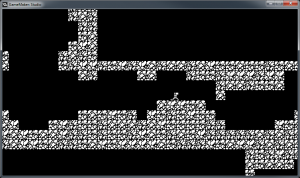 The enemy functionality and gameplay feel require a lot of testing and tweaking. It’s a process that must be started as quickly as possible so that enough time can be allotted to it. The basic actions are now working for most enemies, which means that they are ready for another iteration. Luckily, we are getting some new blood in the office, which will surely boost the speed at which we can churn out content and mold it fit our purposes.

What do you think about Google+ as a platform? Take a look at our profile and say hello if you happen to be in the neighborhood.